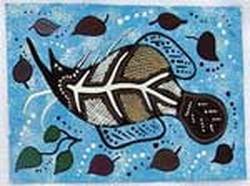 
Long ago in the dreamtime, there were no fish, so the people lived on animals, roots and berries. They were all quite content. That is except Boodi and Yalima; for they wanted to mary. But the tribe insisted that Yalima marry one of the old men, to look after him. Boodi and Yalima decided to run away, and so they did. Now, to go against the Elders of the tribe is breaking the law, and is punishable by death, so soon the men of the tribe began hunting them.

They ran on and on, although they became very tired, they had to keep running. Eventually, they came to the edge of the land, where the water began and they knew that to survive, they would have to fight.

With the angry tribe descending on them, they quickly gathered wood, and made as many spears as they could . But the tribesman were too many, and soon the spears were all gone. Boodi turned to his beloved Yalima and said, "for us to be together forever, we must go into the water to live." And so they did.

They are still there in the shape of the Barramundi hiding amongst the logs and reeds.